The Coast of Complacency & a Bright Light From New Zealand

Earth scientists officially refer to the Earth’s current geological period as the Holocene Extinction. The “sciencey-Latiny” Holocene Extinction terminology usually elicits a somewhat calm, sterile response from readers. I think a more appropriate street version for this geological age might more accurately be expressed as the title of a recent Kevin James movie, “Uh Oh! Here comes the boom!”

Those familiar with this newsletter, know I have written about the impending 6th mass extinction of life several (OK, a lot of …) times. Unlike the previous 5 mass extinction events, attributed to natural causes such as a comet hitting the Earth or periods of massive geological activity, the current mass extinction is driven by human behavior. Civilization has uprooted the Garden and thrown a monkey wrench through the web of life. In addition, while we did not create climate change, human behavior has profoundly exacerbated the situation leading to dire consequences for civilization.

Unfortunately, the public has not been truly informed of our looming extinction and more importantly they have been left in the dark regarding actions we can engage in now that will ease the transition into a new world. Firstly, it is not in the interest of corporate profits to resist climate change. Corporations desire global warming because it will expose formerly ice-covered Arctic and Antarctic landmasses, offering opportunities to open new virgin territory so they can rape and pillage more of the planet’s resources. For years, big petroleum companies have created “alternative facts” and funded millions of dollars in advertising to mislead the public on the nature of our impending climate upheaval.

Secondly, the lack of public awareness is because the news media has an unwritten rule, do not dwell on bad news that cannot be controlled or influenced by the human population. Hence extinction stories are not on the first page and hidden all together.

Thankfully, the Universe has led us to the Trump presidency. Unbeknownst to Donald, he is an instrument in planetary evolution. To hasten corporate intentions, the current administration has fully endorsed an effort to discredit science and mute researchers to prevent the release of vital scientific data affecting life on this planet.

I know Trump is fueling a much-needed awakening of the public to once again consciously nurture our planet and our selves. Regardless, as a scientist, I can’t help but be appalled at the massive budget cuts in scientific research, the elimination of the Environmental Protection Agency, the attack on public education and the undermining of healthcare for millions of people.

Why must we go through this? As a civilization, we have simply become too complacent, waiting for “someone” to fix the situation. Seriously, we cannot wait for some figure from above to lead us out of the Valley of Death and into the Light. To survive the looming extinction, each of us must awaken from this dystopian nightmare and take action into our own hands. Thanks Donald Trump! We needed that slap in the face.

I have to admit that the daily news has dampened my spirit … all the articles are about the problems hailing down from above. I have been awaiting some form of collective backlash, people standing up for their rights as human beings. My spirits were immediately buoyed up after a recent conversation with my daughter Jennifer, a Professor of Geography at Central Washington University. While it is not much in the news, Jen informed me that people around the States are coming together in local communities. Republicans, Democrats and Independents are collectively recognizing they share a common desire to seek peace, health and happiness for all. YES … underneath the radar, the formerly complacent are banding together to take back power over their lives. Community action is mobilizing at the grass roots, people are turning out to attend town hall meetings and demanding their representatives actually represent them and not the ruling corporate interests. Citizens are recognizing that focusing on local elections is the first and necessary step in fulfilling the needs of a democracy.

This is the message that Aboriginal people have been trying to tell Westerners for the last few hundred years, all the while, the Powers to Be have waged a genocidal war to silence them. And, we are now awakening to their vital message. Our Evolutionary path will be marked by an emerging global community among humans and, as importantly, a partnership of humanity with the Earth, Mother Gaia.

We have recently experienced a head-on collision between the government and Native Americans in the Dakotas. While the resolution has been strong-armed by private and government armed forces, the incident has awoken a sleeping giant. Environmentalists, veterans and people from all walks of life are now banding together with Native Americans to protect and nurture Mother Gaia.

To close: A most wonderful story from New Zealand!

(Sidebar: For those that did not hear, New Zealand is one of the prominent land masses of a NEW continent … now there are eight of them. The new continent, which I am enjoying at this moment, is called Zealandia).

New Zealand is the only country the British tried to capture but in the end had to sign a peace treaty with the fierce Indigenous Māori natives. As part of the ruling government, Māori spirituality has played a major role in New Zealand society since its inception.

A 140 years of Māori perseverance has led to a most remarkable piece of legislation, one that I hope will have global consequences. The 90-mile long Whanganui River has been granted the legal rights of a human. A tribal member and a government representative will serve as legal guardians of the river. Rivers are life and now their future, and by intimate connection, our future, can be protected 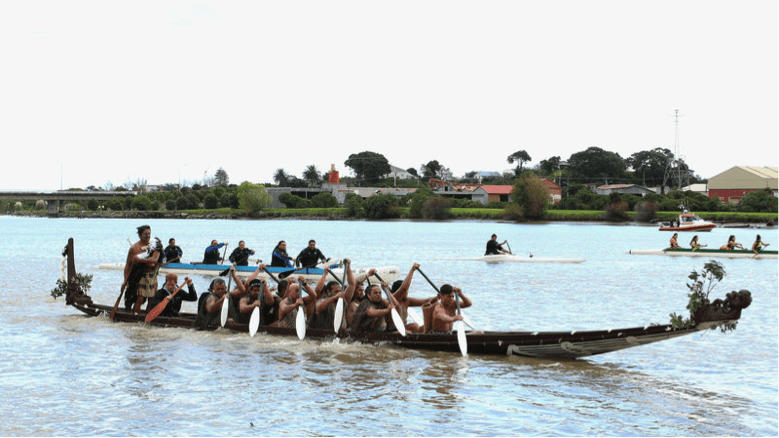 Māori paddlers guide a boat down the Whanganui River in New Zealand, during a visit from Britain’s Prince Harry in 2015.

For the first time in New Zealand’s history, the country’s lawmakers have granted a river the legal rights of a human. The parliamentary vote Wednesday, which caps more than 140 years of legal struggles, ensures the roughly 90-mile Whanganui River will be represented by two guardians in legal matters that concern the waterway.

The legislation marks a monumental victory for the local Māori people, who view the river as “an indivisible and living whole,” Gerrard Albert, lead negotiator for the Whanganui tribe, tells The Telegraph. “It has been a long, hard battle” to earn legal recognition of the river, which is known by the Māori as Te Awa Tupua.

Under that name, the river will be appointed representatives — one each from the tribe and the government — in court proceedings. And the BBC notes the settlement also includes $80 million in financial redress and $30 million toward improving the river’s health.

“It’s not that we’ve changed our worldview, but people are catching up to seeing things the way that we see them,” Adrian Rurawhe, a Māori member of Parliament, tells the New Zealand Herald.

It is, however, a new concept for New Zealand’s government — and one it took a long time to come around to. The Herald reports the local Māori have sought to obtain legal protections for the Whanganui River since 1873, giving rise to “one of New Zealand’s longest running court cases.”

With the news that their generations-long efforts have finally succeeded, the hundreds of tribal representatives on hand for the moment “wept with joy when their bid to have their kin awarded legal status as a living entity was passed into law,” according to The Guardian.

Chris Finlayson, New Zealand Minister for Treaty of Waitangi Negotiations, admitted the arrangement is a unique one in the country’s history — but he says it’s not as unfamiliar as you may think.

“I know the initial inclination of some people will say it’s pretty strange to give a natural resource a legal personality,” Finlayson says, according to the BBC. “But it’s no stranger than family trusts, or companies or incorporated societies.”

In the end it’s a matter of recognition, Finlayson tells Buzzfeed News.

“This legislation recognizes the deep spiritual connection between the Whanganui Iwi [tribe] and its ancestral river, and creates a strong platform for the future of Whanganui River.”

Wishing You a Wonderful Healthy, Happy & Harmonious Experience on Earth! Check out this book by Serge Mazerand, 7 Keys to Serenity: Creating Harmony Within; it’s music to your soul!
More details

Check out this documentary, A Quest for Meaning. This will be available for free online for a limited time! Sign up here to watch it.