No June, July Newsletter???? I am sorry for my unscheduled interruption in my communication with you, however, in this instance, it was truly a case of “no news is good news.”

The Good News: In recognizing the 10th anniversary since the publication of The Biology of Belief, Hay House and I considered the release of a new revised and updated version. The joy I experienced was upon rereading the book (something I last did about 10 years ago!). I was truly delighted to find that it was not necessary to change a word in the original manuscript. All the information described in the first edition has been fully endorsed through the last decade of scientific research. In fact, the fundamental principle espoused in The Biology of Belief is now recognized as a specific field of study called “Behavioral Epigenetics,” the science of how lifestyle and beliefs control our genetic activity.

While no efforts were needed for a revision, I did have the opportunity to dig deep into the current scientific literature in order to add new insights and current topics of interest. About 70 additional pages have been added that include interesting content such as the false myths about cholesterol and statin drugs, the “Fountain of Youth” found in telomeres, the non-coding extensions of our DNA molecules, and a new life sustaining “organ” found in our bodies, the two to three pound microbiome, comprised of ~500 trillion friendly bacteria, among others.

This was not just an intense work-filled period reviewing stacks of books and journals while drinking copious quantities rich-brewed Peet’s coffee. In the midst of this process the Universe offered up a life changing, mind bending, and heart-opening experience. I was invited to participate in a Sundance Ceremony, one of the deepest and most profoundly spiritual practices of First Nations people (Canadian Native Americans). Driving four hours north of Vancouver and deep into the rich forests of British Columbia I ended up in Lillooet, one of the few isolated communities in this wonderfully undeveloped region of Canada.

There I met with my dear Brother and Spiritual Advisor, Chief White Standing Buffalo (aka, Tom McCallum). Having formerly been taken in by his lovely family, I was now adopted by his amazing Cree community. I was honored to be among my Relations, for their compassion for others and the planet, their deep belief in honoring Nature and the Great Creator, and the joy with which they face their often hard life experiences … they are truly the full expression of the lofty definition of being a “human.”

For the first two and a half days, I worked with a crew of men creating a 50-foot diameter circular arbor made of trees we harvested from the surrounding woods. Special point: when ever a life form, such as trees, bushes and plants were used in making the arbor, a special prayer of thanks to the spirit of each of these living beings was offered for sacrificing their lives in support of the ceremony.

A specially selected 30-foot high tree was cut and trimmed to a height of 20-feet and then “planted” in the center of the arbor in a 5-foot hole dug by the women. This particular poplar tree was amazing for its smooth grey bark was marked with an ascending series of black spots created by the claws of a bear who climbed to its highest reaches. Interesting point, the tree once cut is not allowed to touch the ground until it was placed in the arbor by a small crew of men, a veritable feat of strength and intention. This center tree represents the connection with the Great Creator. An imaginary line down the arbor’s center split it into two halves; one side of the arbor was for women, the other side for men.

Next, I was involved with a ceremony to collect thin leafy branches that would be woven into 5-foot diameter wreath, representing the nest of the Thunderbird. This mythical figure representing weather and winds was the first of the Great Creator’s creations. The thunder in storms is attributed to the flapping of the Thunderbird’s wings, while lightening bolts are derived from its eyes.

Along with six other men whose mothers had “walked on,” I participated in a branch-collecting process representing the Wolf Ceremony. We each went into the woods and gather leafy branches that we tied into a sheath. We also made a small wreath that was used to hold a blanket that was draped over our heads. When the task was complete, we returned to the arbor with our sheaths of branches. On the way we stopped three times, got down on our knees and howled like wolves. This was a practice to call each of our mother’s spirits to invite them to attend the ceremony.

When we arrived at the arbor with the branches, we all got on our knees again. This time, the women ran from their side of the arbor to see who would be able to grab the 7 wreathes used to hold the blankets on our heads. Those who a grabbed a wreath would be offered a happy, healthy life for the coming year.

After the weaving of the Thunderbird nest was complete, it was mounted at the top of the center tree. A large white bolt of cloth was laid out and then filled with a massive amount of tobacco offerings provided by the community. The cloth containing the tobacco was tied up and became a large white Thunderbird egg that was placed in the nest.

The roof of the arbor was created from about 20 bolts of colored fabric. Each bolt was about 15 yards long and its color represented a part of the rainbow spectrum. The material was tied to the center tree and radiated out and tied to the ring of cut trees and limbs that formed a circle defining the periphery of the arbor. At completion, the roof looked like a giant rainbow umbrella. Which in the end was greatly appreciated as the temperature in Lillooet during the ceremony was over 120° for three of the days!

Photographs and recordings of a Sundance Ceremony are rightly prohibited for this very spiritual experience. However, to give a view of the arbor, Chief White Standing Buffalo has honored us by providing the following photograph that does not capture any of the participants: 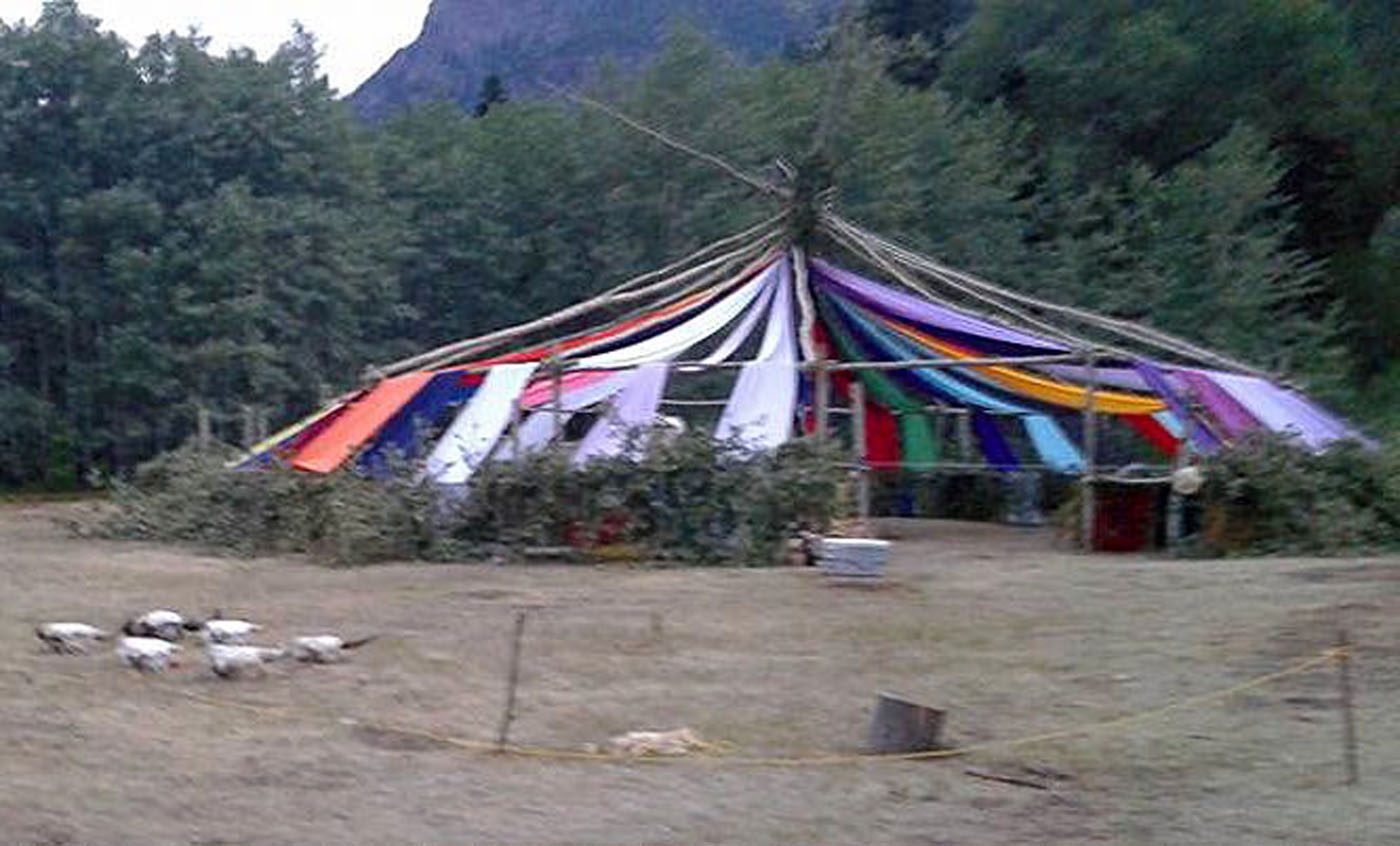 Before the beginning of the 2-day Sundance Ceremony, a group of men assigned as the ceremonial Sweatdancers, held a sweat in a lodge we built. After that they were on a food and water fast till the end of the ceremony, especially difficult when considering the sweltering heat.

Each of the specific ceremonial dances was accompanied by group of drummers and chanters. With every exhale of their breath while dancing, the Sundancers blew on bone whistles suspended from their necks with rawhide ties. While the “ceremonial dancers” performed in the center of the arbor, all of the other participants, myself included, danced in a circle around them. The sounds of the drums, chants and whistles were mesmerizing. During those intense periods my mind took me back in time where I experienced myself dancing with Indians on the plains before the peaceful world was overrun by invading Europeans. In living this image, my 50 trillion cells danced with the full-out joy of once again being totally connected with Mother Nature.

One of the more moving of the dances was the Buffalo Dance. Three of the dancers wore buffalo skins and their heads were adorned with buffalo horns. Ceremony participants were given tied rings of blue and white ribbons. During the dance we held those ribbons and imparted into them our intentions for the spirit of someone who had committed suicide to be pushed into the arms of the Great Creator by the Spirit Buffalo. I hung my ribbon in honor of our dear departed friend, Robin Williams.

Included among the many dances held over the two days were a number of body piercing ceremonies. Many of you old timers may remember the piercing ceremony in a major film from 1970 titled A Man Called Horse, starring Richard Harris. The bodies of the dancers were pierced, either on their chest or on their backs. Ropes were tied to wooden pegs that went through the piercings. The ropes on the chest were tied to the ceremonial tree and those dancers were either suspended from the ropes or danced leaning backwards and were supported by the ropes. Back piercings were tied to a chain of 6 buffalo skulls (see left foreground of attached photo) that the dancer dragged on the ground around the arbor.

The reason the piercings occur is amazing. In First Nation and Native American cultures, people did not “own” things. So what kind of offering can an individual provide to the Great Creator? The only thing they “almost” own is their own body. Those dancers who engage in body piercing are actually offering themselves to the Creator in support of their wish to bring healing and love to ALL of the people of Earth. Now that is a commitment to advancing human civilization.

The experience of being in the wilderness and surrounded by a community of truly loving and giving Human Beings is an opportunity for transcendence! In fact, I was following my own advice that I offered in a chapter I wrote for the anthology Healing Our Planet, Healing Our Selves (2005):

“Taken together, leading edge scientific research returns us to our aboriginal roots, which stressed the belief that humans are one with Nature. Aboriginal people recognize and honor the “spirits” of the air, the water, the rocks, the plants and animals, and most importantly, the spiritual nature of themselves. Fortunately, many of the lost traditions of our forefathers are still available in the few remaining aboriginals that inhabit our planet. Native Americans, African tribes, South American Indians and Australian Aborigines still hold the secrets of how to live in harmony with the planet. We should create an international project to honor these people and we should sit at their feet to learn their life-sustaining insights about the secrets of Nature. When we return to our aboriginal roots, “The powerful light that has been banished will return.” I am not suggesting that we shed our technology, don loincloths and camp in the woods. I am instead suggesting that we and our technology must learn to live in harmony with our Mother, our dear Earth.”

I hope this month’s correspondence was informative and enjoyable, and I want to thank each and every one of you for reading this newsletter. Each of you is a source of change that will help our planet thrive into the future. Thank you dear friends for working toward manifesting a new sustainable, peaceful and loving world. Please prepare for the future and take care of yourselves, for you are the Cultural Creatives who are needed to help our civilization successfully evolve!

p.s. The official release date of the 10th Anniversary Edition of The Biology of Belief is October 14, 2015.

With wishes of Love and Light,
Bruce

I’m excited for the release of Gotcha! The Subordination of Free Will, by my friend and colleague Eldon Taylor. To order click here