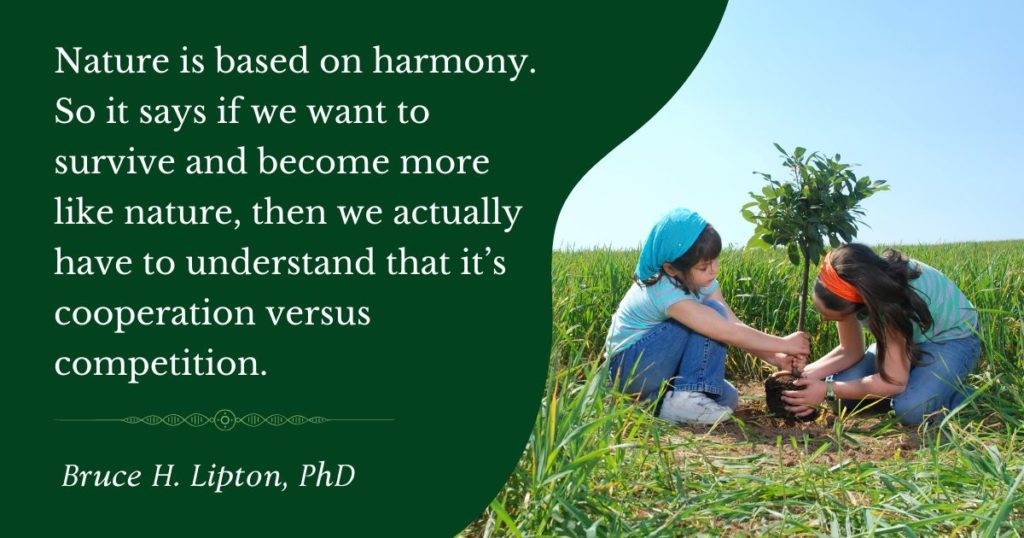 The Role of Spirituality in a Worldshift
Bruce H. Lipton, Ph.D.

We are truly living in exciting times. The challenges and crises facing the world today are portents of imminent change in civilization. We are on the threshold of an incredible global evolutionary shift. The current panoply of global crises collectively reveals we are facing our own extinction. Scientists acknowledge that the current degradation of the environment and the massive loss of species, are evidence that we are deep into the sixth mass extinction to hit Earth since the origin of life. Unlike the first five massive die-offs, attributed to physical causes such as life-destroying geological upheavals and the impact of comets and asteroids, the current wave of extinctions is due to a source much closer to home: human behavior. Our way of life is wreaking havoc in the global community and our survival is now in question.

Crises are harbingers of evolution. Albert Einstein wisely proffered, “We cannot solve the problems with the same thinking that created them.” Consequently, the planet’s hope and salvation lies in the adoption of revolutionary new knowledge being revealed at the frontiers of science. This new awareness is shattering old myths and rewriting the “truths” that shape the character of human civilization.

New science revises four fundamental beliefs that shape civilization. These flawed assumptions include: 1) The Newtonian vision of the primacy of a physical, mechanical Universe; 2) Genes control biology; 3) Evolution resulted from random genetic mutations; and 4) Evolution is driven by a struggle for the survival-of-the-fittest. These failed beliefs represent the “Four Assumptions of the Apocalypse,” for they are driving human civilization to the brink of extinction.

Modern science is predicated on “truths” verified through accurate observation and measurements of physical world phenomena. Science ignores the spiritual realm because it is not amenable to scientific analysis. As importantly, the predictive success of Newtonian theory, emphasizing the primacy of a physical Universe, made the existence of spirit and God an extraneous hypothesis that offered no explanatory principles needed by science.

In the wake of Newtonian theory, with the Hand of God out of the way, society has been preoccupied with dominating and controlling Nature. Darwin’s theory further exacerbates the situation by suggesting that humans evolved through the happenstance of random genetic mutations. Accordingly, we evolved by pure “chance,” which by extension means: without an underlying purpose for our existence. Darwinian theory removed the last link between God, spirit and the human experience. Additionally, Darwinism emphasizes that evolution is based on “the survival of the fittest in the struggle for existence.” For science, the end of the evolution struggle is simply represented by “survival.” As for the means to that end, apparently anything goes. Darwinism leaves humanity without a moral compass.

A mechanical Newtonian Universe in combination with Darwin’s theory of random evolution disconnects us from Nature and spirit, while legitimizing the exploitation and degradation of our fellow humans and the environment.

Modern science has led the world to shift from spiritual aspirations to a war for material accumulation. In addition to terrorizing the world’s human population, scientific “progress” has terrorized Mother Nature herself. Our credo, “Better Living Through Chemistry,” has led to our efforts to control Nature with toxic petrochemicals. As a result, we have polluted the environment, undermined the harmony of the biosphere and are rapidly driving ourselves toward extinction.

All is not lost. Advances from science’s frontier offer new insights that provide a bright Light at the end of this dark tunnel. Firstly, in contrast to the emphasis on the Newtonian material realm, the newer science of quantum mechanics reveals that the Universe and all of its physical matter are actually made out of immaterial energy. Atoms are not physical particles; they are made of energy vortices resembling nano-tornadoes.

Quantum physics stresses that the invisible energy realm, collectively referred to as the field, is the primary governing force of the material realm. It is more than interesting that the term field is defined as “invisible moving forces that influence the physical realm,” for the same definition is used to describe spirit. The new physics provides a modern version of ancient spirituality. In a Universe made out of energy, everything is entangled, everything is one.

Biomedical research has recently toppled the widespread belief that organisms are genetically controlled robots and that evolution is driven by a random, survival-of-the-fittest mechanism. As genetically controlled “robots,” we are led to perceive of ourselves as “victims” of heredity. Genes control our lives yet we did not pick our genes, nor can we change them if we don’t like our traits. The perception of genetic victimization inevitably leads to irresponsibility, for we believe we have no power over our lives.

The exciting new science of epigenetics emphasizes that genes are controlled by the environment, and more importantly, by our perception of the environment. Epigenetics acknowledges that we are not victims, but masters, for we can change our environment or perceptions, and create up to 30,000 variations for each of our genes.

Quantum physics and epigenetics provide amazing insight into the mystery of the mind-body-spirit connection. While Newtonian physics and genetic theory dismiss the power of our minds, the new science recognizes that consciousness endows us with powerful creative abilities to shape our lives and the world in which we live. Our thoughts, attitudes and beliefs control behavior, regulate gene expression and provide for our life experiences.

In contrast to random mutations, science has identified “adaptive” mutation mechanisms, wherein organisms adjust their genetics to conform to existing environmental conditions. We did not get here by chance. Every new organism introduced into the biosphere supported harmony and balance in the Garden. Every organism is intimately engaged with the environment in a delicate pas de deux. Human existence is not a random accident, but a carefully choreographed event that takes into account the cooperative nature of the biosphere. Humans evolved as the most powerful force in supporting Nature’s vitality. However, we have misused that power and are now paying the price for our destructive behavior.

The crises we face present us with the greatest opportunity in human history – conscious evolution. Through consciousness, our minds have the power to change our planet and ourselves. It is time we heed the wisdom of the ancient indigenous people and channel our consciousness and spirit to tend the Garden and not destroy it.

The story of human life on Earth is yet to be determined. Our evolution depends on whether we are willing to make changes in our individual and collective beliefs and behaviors, and whether we are able to make these changes in time. The good news is that biology and evolution are on our side. Evolution – like heaven – is not a destination, but a practice.

A miraculous healing awaits this planet once we accept our new responsibility to collectively tend the Garden. When a critical mass of people truly own this belief in their hearts and minds and begin living from these truths, our world will emerge from the darkness in what will amount to a consciousness-based Worldshift – a spontaneous evolution for humans, by humans.

Focus: “The role of spirituality in a Worldshift” (rapid and fundamental transformation). Spirituality is an important factor helping us move toward a more peaceful, humane and sustainable world when it enters the stream of ideas and values that actively guide the processes of change.